Home » Please Save Alfred Russel Wallace's Scientific Medals! (Or At Least One Of Them...)

Please Save Alfred Russel Wallace's Scientific Medals! (Or At Least One Of Them...)

The prestigious medals which Alfred Russel Wallace was awarded for his outstanding scientific work, including his independent discovery of natural selection and his seminal work on evolutionary biogeography, must surely be some of the most important cultural objects in the history of science. Unlike his natural history specimens, they do not have scientific value, but culturally they are unique and precious treasures. They will soon be sold individually at an auction by Morton & Eden (on 20 July 2022) and will probably disappear into private collections worldwide unless one or more of them can be purchased and donated to a institution, where future generations can admire and be inspired by it/them. The auction catalogue, with estimated sale values, can be seen here: https://www.mortonandeden.com/wp-content/uploads/2019/01/117online.pdf (the medals are the final Lots), or online here: https://www.biddr.com/auctions/mortonandeden/browse?a=2745&c=56705&fbclid=IwAR06D0vpFzvk4b1Qwey268dRqP-z1jl0EOHVsTbu7Foh4s6aaj_Z1xqXv1Q

The theory of evolution by natural selection has been described as "…arguably the most momentous idea ever to occur to a human mind...” (Dawkins, 2007), but it was in fact discovered by two minds, not just one. Although many people know something about the theory, relatively few realise that it was published jointly by Charles Darwin and Alfred Russel Wallace in August 1858. Fifteen months later the idea was elaborated and popularised in Darwin's book Origin of Species, and the rest is history. Perhaps surprisingly, Darwin never received a single award for his role as its co-discoverer, as is explained here: https://wallacefund.myspecies.info/content/darwins-lifetime-he-was-not-awarded-medal-his-discovery-natural-selection-wallace-was Wallace, however, received no less than five medals for his part in proposing the theory, making these are the only awards honouring the theory's discovery (please see https://wallacefund.myspecies.info/honours-wallace-received). They are without doubt the last important artifacts connected to this great discovery still in private hands. If not even a single one is purchased for an public collection, future generations will wonder how the opportunity to do so was lost. 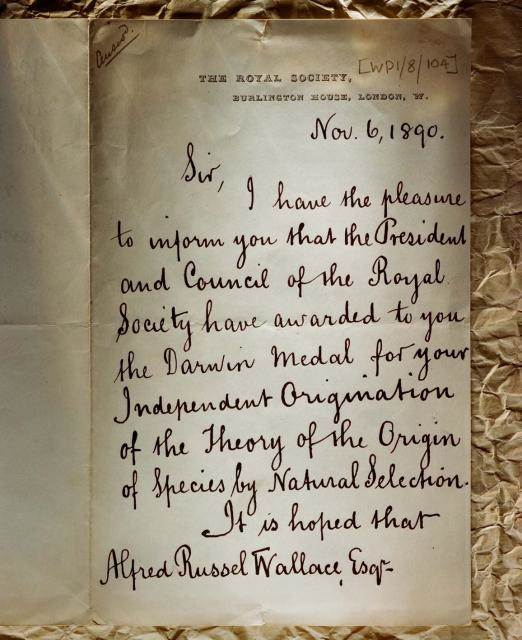 The A. R. Wallace Memorial Fund has successfully undertaken a number of projects to help keep Wallace's memory alive, including restoring his grave in Dorset, UK and commissioning a larger than life-size bronze statue of him as a young man, which is now on display in the Natural History Museum, London (see https://wallacefund.myspecies.info/1999-wallace-s-grave and https://wallacefund.myspecies.info/bronze-statue-wallace). We think that out of all the medals Wallace received the two most important are the following:

1) The Copley Medal of the Royal Society (in silver and in gold), which was awarded in 1908 "On the ground of the great value of his numerous contributions to natural history, and of the part he took in working out the theory of the origin of species by natural selection." This is the highest award of the Royal Society, the World's pre-eminent scientific society.

2) The gold Darwin-Wallace Medal of the Linnean Society of London, awarded in 1908, also to honour his role as the co-discoverer of natural selection. Wallace was the first recipient of this medal, and his was the only gold version ever minted. It is shown below. For more information see https://wallacefund.myspecies.info/content/darwin-wallace-medal

Of these the Darwin-Wallace medal is particularly special, not only because it features portraits of Darwin and Wallace, but because it was created to commemorate the 50th anniversary of the reading of the Darwin-Wallace papers on natural selection, which had taken place at the Linnean Society on the 1st July 1858. The Linnean Society has informed the Wallace Fund that it would very much like to have the medal and would add it to their amazing collection of historic artifacts associated with Linnaeus, Darwin, Wallace and other leading naturalists. The Wallace Fund would be delighted to hear from anyone who would be willing to purchase the medal and then either donate it to the Society, or loan it to them long-term. Given its importance, we expect that it will probably sell for more than the auction estimate, so this should be borne in mind when making a decision to attempt to buy it. If you are willing to make a serious attempt to purchase it (or another of the medals) then please contact the Chair of the Wallace Fund, Dr George Beccaloni (g.beccaloni@wallaceletters.org). In the event that more than one generous benefactor steps forward, George will discuss the matter with all concerned and perhaps see if the cost can be split. The other advantage of George/the Linnean Society  coordinating any potential bidders is to ensure that they don't bid against one another. 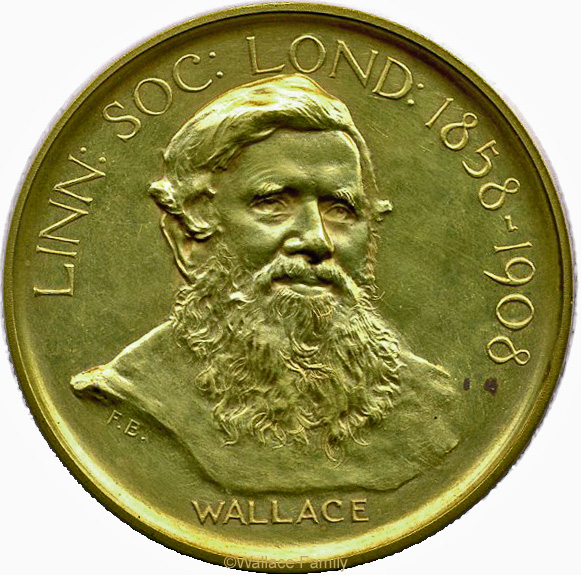