When Wallace was travelling in the Malay Archipelago from 1854 to 1862 he employed a number of assistants to collect and prepare animal specimens and help him with his day-to-day chores. Most were only with him for short periods of time and they are therefore only briefly mentioned in his book The Malay Archipelago or in letters to his family. Charles Allen and Ali, however, were the two exceptions. They were with him for several years each and he wrote enough about them for us to know what they were like as people. What follows are summaries of what is known about each.

In his autobiography My Life Wallace says that Charles Allen

"...was a London boy, the son of a carpenter who had done a little work for my sister, and whose parents were willing for him to go with me to learn to be a collector. He was sixteen years old, but quite undersized for his age, so that no one would have taken him for more than thirteen or fourteen [he was in fact fourteen!]. He remained with me about a year and a half, and learned to shoot and to catch insects pretty well, but not to prepare them properly. He was rather of a religious turn, and when I left Borneo he decided to stay with the bishop and become a teacher. After a year or two, however, he returned to Singapore, and got employment on some plantations. About five years later he joined me in the Moluccas [in Ambon Island] as a collector. He had grown to be a fine young man, over six feet. When I returned home he remained in Singapore, married, and had a family. He died some fifteen years since."

Charles travelled from Britain to the Malay Archipelago with Wallace in 1854, and during the early part of the trip Wallace was not at all impressed by him, as can be seen in the following extracts from Wallace's letters to his family:-

"Charles gets on pretty well in health, and catches a few insects; but he is very untidy, as you may imagine by his clothes being all torn to pieces by the time we arrived here. He will no doubt improve and will soon be useful." [Letter to Wallace's mother from Singapore dated April 30th 1854]

"If it were not for the expense I would send Charles home; I think I could not have chanced upon a more utterly...careless boy. After 5 months I have still to tell him to put things away after he has been using them as the first week. He is very strong & able to do any thing, but can be trusted to do nothing out of my sight." [Letter to Wallace's mother from Singapore dated September 30th 1854]

"Charles has now been with me more than a year & every day some such conversation as this ensues - "Charles work at these butterflies that you set at yesterday" "Yes sir" "look at that one, is it set out evenly" "No Sir." "Put it right then & all the others that want it" In five minutes he brings me the box to look at. "Have you put them all right" "Yes sir." - "There's one with the wing uneven. There's another with the body on one side - There another with the pin crooked. Set them all right this time. It most frequently happens that they have to go back a third time. Then all is right. If he puts up a bird, the head is on one side, there is a great lump of cotton on one side of the neck like a wen [?], the feet are twisted soles uppermost or something else - In every thing it is the same what ought to be straight is always put crooked. This after 12 months constant practice & constant teaching! And not the slightest sign of improvement, I believe he never will improve - Day after day I have to look over every thing he does & tell him of the same faults. Another with a similar incapacity would drive me mad." [Letter to Wallace's sister from Sarawak dated June 25th 1855]

In 1856 Wallace wrote: "Charles has left me. He has staid [sic] with the Bishop at Sarawak who wants teachers & is going to try to educate him for me. I offered to take him on with me paying him a fair price for all the insects &c. he collected, but he preferred to stay. I hardly know whether to be glad or sorry he has left. It saves me a great deal of trouble & annoyance & I feel it quite a relief to be without him. On the other hand it is a considerable loss for me, as he had just begun to be valuable in collecting." [Letter to Wallace's sister & brother-in-law from Singapore dated February 20th 1856]

Allen joined Wallace again in January 1860 on Ambon Island and worked for him collecting birds, insects and other animals until Wallace returned to England in 1862. During this period he worked independently, travelling to several islands, including New Guinea, where he went in search of rare Birds of Paradise.

Allen married, had 8 children, and eventually settled in Singapore, where from about 1876 until his death on 7th July 1892 he managed the Perseverance Estate, which grew crops including lemon grass.

No photographs of Allen are known.

In his autobiography My Life Wallace recounts

"When I was at Sarawak in 1855 I engaged a Malay boy named Ali as a personal servant, and also to help me to learn the Malay language by the necessity of constant communication with him. He was attentive and clean, and could cook very well. He soon learnt to shoot birds, to skin them properly, and latterly even to put up the skins very neatly. Of course he was a good boatman, as are all Malays, and in all the difficulties or dangers of our journeys he was quite undisturbed and ready to do anything required of him. He accompanied me through all my travels, sometimes alone, but more frequently with several others, and was then very useful in teaching them their duties, as he soon became well acquainted with my wants and habits. During our residence at Ternate he married, but his wife lived with her family, and it made no difference in his accompanying me wherever I went till we reached Singapore on my way home. On parting, besides a present in money, I gave him my two double-barrelled guns and whatever ammunition I had, with a lot of surplus stores, tools, and sundries, which made him quite rich. He here, for the first time, adopted European clothes, which did not suit him nearly so well as his native dress, and thus clad a friend took a very good photograph of him. I therefore now present his likeness to my readers as that of the best native servant I ever had, and the faithful companion of almost all my journeyings among the islands of the far East." 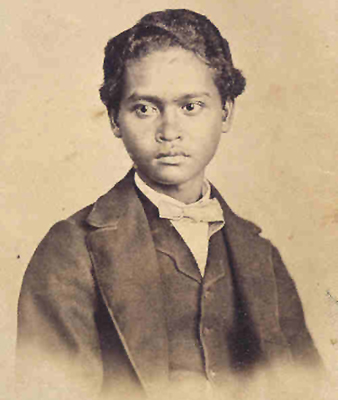 Ali in 1862. This photo was published in My Life. Copyright Richard Wallace.

Ali was a Muslim who didn't speak English, only Malay, and could not read or write. He was at first Wallace's cook and servant, progressing to becoming Wallace's main bird collector and skinner, and eventually his chief assistant or 'head man'. Wallace seemed to be very fond of him and mentioned him many times in his book The Malay Archipelago. Ali and Wallace nursed each other through many illnesses, probably saving each other's lives at least once. For example in Macassar, Sulawesi Wallace wrote:

"My boy Ali had hardly been a day on shore before he was attacked by fever...I fell ill myself with strong intermittent fever every other day. In about a week I got over it by a liberal use of quinine, when scarcely was I on my legs that Ali again became worse than ever. His fever attacked him every day, but early in the morning he was pretty well and then managed to cook me enough for the day. However now after another week I have cured him."

In Lombok Ali became lame and Wallace noted "I gave Ali my horse & started on foot, but a little way on he mounted behind Mr Ross' groom & we got home very well though rather hot & tired."

In 1907 an American biologist, Thomas Barbour, visited Ternate and met Ali, who was by then an old man (Ali was fifteen when Wallace first hired him, so he must have been about 67 when Barbour met him). This is what Barbour wrote in his 1943 book Naturalist at Large (see http://www.archive.org/stream/naturalistatlarg00barb/naturalistatlarg00barb_djvu.txt):-

"Here came a real thrill, for I was stopped in the street [in Ternate] one day as my wife and I were preparing to climb up to the Crater Lake. With us were Ah Woo with his butterfly net, Indit and Bandoung, our well-trained Javanese collectors, with shotguns, cloth bags, and a vasculum for carrying the birds. We were stopped by a wizened old Malay man. I can see him now, with a faded blue fez on his head. He said, "I am Ali Wallace." I knew at once that there stood before me Wallace's faithful companion of many years, the boy who not only helped him collect but nursed him when he was sick. We took his photograph and sent it to Wallace when we got home. He wrote me a delightful letter acknowledging it and reminiscing over the time when Ali had saved his life, nursing him through a terrific attack of malaria. This letter I have managed to lose, to my eternal chagrin."

Wallace's letter to Barbour has been found, and it is clear that Barbour unfortunately forgot to send Wallace the photo of Ali. Curiously this letter does not contain the reminiscences Barbour mentioned.