Home » In Darwin's lifetime he was not awarded a medal for his discovery of natural selection, but Wallace was.

In Darwin's lifetime he was not awarded a medal for his discovery of natural selection, but Wallace was.

It is a seemingly extraordinary fact that Charles Darwin was never awarded any medals for his discovery of natural selection, yet Alfred Russel Wallace was awarded five for his independent origination of the idea (one in Darwin's lifetime and four after Darwin's death). These were the Royal, Darwin and Copley medals of the Royal Society (the World's pre-eminent scientific society) and the Linnean and Darwin-Wallace medals of the Linnean Society of London (the World's oldest active biological society) (see https://wallacefund.myspecies.info/honours-wallace-received).

The medals Darwin received were as follows:

1853: Royal Medal of the Royal Society, for his work on barnacles.

1859: Wollaston Medal of the Geological Society of London, in recognition of his scientific contributions to Geology.

1864: Copley Medal of the Royal Society, for his achievements in Geology, Zoology and Physiological Botany.

1879: Baly Medal of the Royal College of Physicians, for his distinguished work in Physiology.

The most prestigious of these awards was the Copley Medal - the Royal Society's highest honour, but Darwin's work on evolutionary biology was deliberately "not included" in the award (see https://royalsocietypublishing.org/doi/pdf/10.1098/rsnr.1976.0014). When awarding the medal, the President of the Society said:

"In his most recent work 'On the Origin of Species,' although opinions may be divided or undecided with respect to its merits in some respects, all will allow that it contains a mass of observation bearing upon the habits, structure, affinities, and distribution of animals, perhaps unrivalled for interest, minuteness, and patience of observation. Some amongst us may perhaps incline to accept the theory indicated by the title of this work, while others may perhaps incline to refuse, or at least to remit it to a future time, when increased knowledge shall afford stronger grounds for its ultimate acceptance or rejection. Speaking generally and collectively, we have not included it in our award." (See https://www.biodiversitylibrary.org/item/137990#page/581/mode/1up).

By 1868, Darwin and Wallace's theory had gained enough converts for the Royal Society to award a medal to Wallace partly in recognition of his discovery of natural selection. This was the Society's Royal Medal and it was the first of seven medals Wallace would receive (he also received the highly prestigious Order of Merit), five of which were partly or soley for his independent discovery of natural selection. He had been put forward for the Royal medal by his friend Thomas Henry Huxley and it was presented to him at a ceremony on the 30th November 1868. Here is an account of what the President of the Society said:

"A Royal Medal has been awarded to Mr. Alfred Russell [sic] Wallace, in recognition of the value of his many contributions to theoretical and practical zoology, among which his discussion of the conditions which have determined the distribution of animals in the Malay archipelago (in a paper on the zoological geography of that region, published in the Proceedings of the Linnean Society for 1859) occupies a prominent place.

The case may be briefly stated thus :—The strait separating the islands of Baly and Lembok [Lombok] is only fifteen miles wide ; nevertheless the animal inhabitants of the islands are widely different, the fauna of the western island being substantially Indian, that of the eastern as distinctly Australian.

Mr. Wallace has described, in a far more definite and complete manner than any previous observer, the physical and biological characters of the two regions which come into contact in the Malay archipelago ; he has given an exceedingly ingenious and probable solution of the difficulties of the problem, while his method of discussing it may serve as a model to future workers in the same field.

Another remarkable essay, "On the tendency of Varieties to depart indefinitely from the Original Types," published in the Proceedings of the Linnean Society for 1858, contains an excellent statement of the doctrine of Natural Selection, which the author, then travelling in the Malay archipelago, had developed independently of Mr. Darwin ; and, apart from its intrinsic merits, this paper will always possess an especial interest in the history of science, as having been the immediate cause of the publication of the 'Origin of Species.'

Mr. Wallace's ability as an observer and describer of animal forms is shown in his numerous and valuable contributions to our knowledge of the animals, and especially the Pigeons, Parrots, and Butterflies, of the Malayan region.

It must not be forgotten that a knowledge of the circumstances under which the majority of these contributions to the higher branches of zoological science were made must greatly enhance our respect for the author. Mr. Wallace has spent the greater part of his life amidst the exhausting and often dangerous fatigues of a traveller in tropical countries rarely explored by Europeans ; and some of his most valuable papers are dated from places which some might consider so little favourable to study as Ternate and Sarawak.

Mr. Wallace,
I have the pleasure of presenting to you this Medal in recognition of the great merit of your researches both in practical and theoretical Zoology, carried out in countries where such pursuits are necessarily attended with more than usual difficulties and dangers." (See https://www.biodiversitylibrary.org/item/138506#page/174/mode/1up).

So it is evident that, initially at least, Darwin was not awarded any medals for natural selection because of disagreement among his colleagues about the validity of the theory. However, given that Wallace was awarded a medal for the theory in 1868 and Darwin lived until 1882, it is curious that no societies awarded Darwin a medal during these fourteen years. Why, for example, didn't the Linnean Society give him a medal, especially considering that they published Darwin and Wallace's 1858 paper which first announced the theory of natural selection to the world? 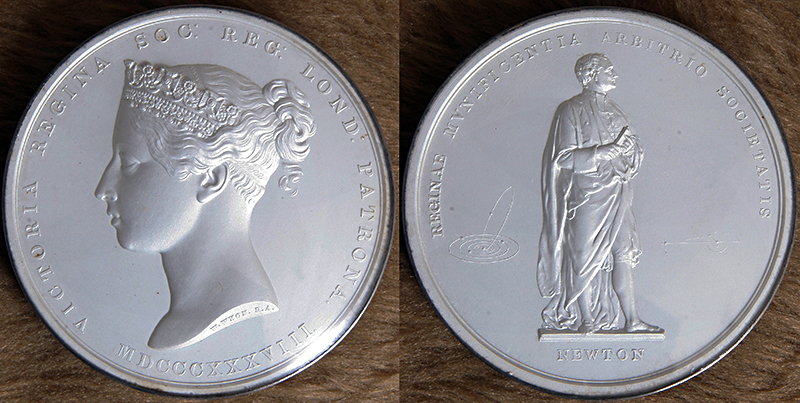