Other things named after Wallace

1. "Wallace's Line" (or "the Wallace Line") was a term coined by Huxley in 1868 for an invisible boundary that separates the Oriental (to the west of it) and Australasia (to the east) zoogeographical regions. The line runs through the Lombok Strait between the islands of Bali and Lombok, then up between Borneo and Sulawesi, and from there continues northward to separate the Philippine island of Mindanao from the small islands of Sangir and Talaud that lie south of it. The significance of the line is that it identifies a major (though not entirely abrupt) faunal discontinuity: many major groups found to the west of the line do not extend east of it, and vice versa. The deep water of the Lombok Strait between the islands of Bali and Lombok formed a water barrier even when lower sea levels linked the now-separated islands and landmasses on either side, resulting in the isolation of the faunas on either side of the barrier. The original map of the Wallace Line (in red) from Wallace's 1863 paper "On the Physical Geography of the Malay Archipelago" [from Wikipedia].

2. "Wallacea" (also known as the "Wallacean region") is the name coined by Dickerson et al. (1928) for the transitional zone between the Oriental and Australasia zoogeographical regions. Wallacea encompasses islands which never had dry land connections to the main land masses of either south-east Asia or Australasia. Consequently it has few of those animals which find it difficult to cross stretches of open ocean (e.g. land mammals, some land birds, or freshwater fish of continental origin).

3. "Wallace's realms" are the world's six basic zoogeographical regions. Each region has a characteristic fauna. Map from Wallace's book The Geographical Distribution of Animals showing the world divided into zoogeographic regions [from Wikipedia].

4. "Wallacean shortfall" is a term coined by Lomolino (2004) to highlight the current lack of information about the geographical distributions of most species.

5. "Wallacean extinction" is a related term proposed by Ladle & Jepson in 2008. It is used to describe the situation where a lack of information about a species' distribution leads to the species erroneously being classed as extinct or threatened with extinction when undiscovered populations are still extant.

6. ‘wallaces‘ (wa) are a unit used to quantify the biogeographical dispersal rate of species.

7. "The Wallace Formula" is a term coined in 1882 for the application of Wallace's mouth-gesture theory of the origin of human language.

8. The "Wallace-Weismann hypothesis" is a name sometimes given to the idea that death in individual organisms is programmed, representing an adaptive evolutionary strategy.

9. The "Wallace Effect" (also known as "reinforcement") concerns the relation of reproductive isolation to the production of sterile hybrids (and ultimately to the speciation process).

11. "Wallacian mimicry" is a term coined in 2018 for flowers which do not reward pollinators (with nectar, pollen etc). Wallace crater on the moon [from Wikipedia]

14. "Mt. Wallace" (13,377 ft.), named by Theodore S. Solomons in 1895, is one of the "Evolution Group" peaks of the Sierra Nevada in California. Amusingly the following website states "The name [of this mountain] was subsequently transposed on the U.S.G.S. map to the westerly ridge of Mount Darwin, but has since been restored to original location." - see http://www.yosemite.ca.us/library/place_names_of_the_high_sierra/w.html

15. The "Wallace Trench" is an undersea chasm located between New Guinea/Australia and Java/Borneo and nearly 7,500 m (25,000 ft) deep. It was not breached during periods of lowered Pleistocene sea levels, so population movement from southeast Asia to Sahul was accomplished, of necessity, via water.

16. The "Wallace Channel" separates the islands of Yamadena and Larat in Indonesia. It was named by Henry O. Forbes in 1885 and appeared on Admiralty charts of the period.

17. "Wallace Bay" is a name coined by Guillemard in his 1886 book The Cruise of the Marchesa to Kamschatka & New Guinea for the bay in front of what is now Tangkoko Nature Reserve in north Sulawesi. Wallace visited this area in 1859 to collect specimens of Maleo birds, which at that time came in large numbers to bury their eggs in the black sand of the beach. Hickson in his 1889 book A Naturalist in North Celebes also used the name. The name is currently not in use.

18. An undersea hill in the Indian Ocean north of Madagascar (3°25.7'S, 56°40.8'E) was named Wallace Hill in November 2003 by Robert Whitmarsh, University of South Hampton, UK, and accredited by SCUFN in May 2004 (see http://ebookily.org/xls/gebco-gazetteer-of-ufn-general-bathymetric-chart-of-the-oceans-8765808.html).

20. The Department of Earth Sciences at Cardiff University, Wales has a "Wallace Lecture Theatre"

21. Bournemouth University in Bournemouth, UK has a "Wallace Lecture Theatre"

23. The National Botanic Garden of Wales, near Carmarthen, Wales has a "Wallace Garden" dedicated to genetics and evolution education

24. Bournemouth Natural Sciences Society (of which Wallace was a founder) has a "Wallace Room"

25. Richard Hale School (formerly the Hertford Grammar School) in Hertford has had a house or division called "Wallace House" since 1928.

27. A health center in Broadstone, Dorset, (18 Kirkway) is named "Wallace House". In the waiting room is (or was) a plaque and clay picture of Wallace.

28. A block of apartments at the end of Wallace Road in Broadstone, Dorset is named "Wallace Court".

29. There are Russel Roads in Grays in Essex and Bournemouth in Dorset and Wallace Roads in Grays and Neath, Wales, and a Wallace Close in Usk, Wales (Wallace lived in or near these towns). However, I do not know if they are named after Wallace.

30. The road leading past the site of Wallace's house "Old Orchard" in Broadstone, Dorset is called "Wallace Road" (Old Orchard was knocked down in 1964). 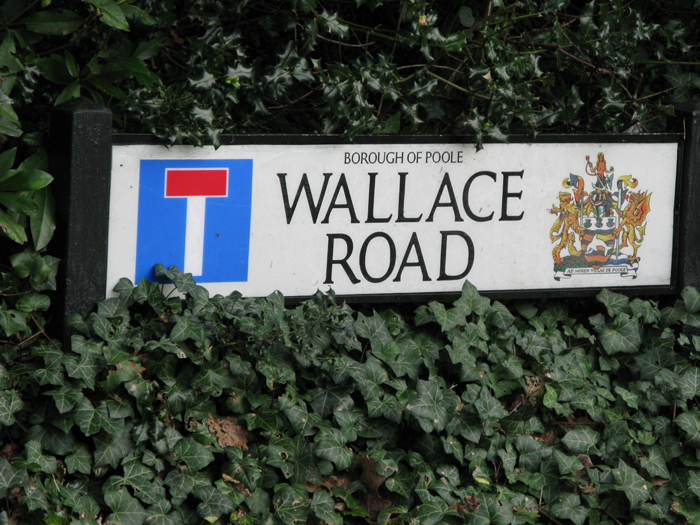 31. A road in Singapore is named "Wallace Way" in his honor.

32. A road off Neath Road (A474) in Rhos near Neath in Wales is named Heol Alfred Wallace.

33. On 3 December 2008 a road on Ternate Island, Indonesia called Jalan Nuri was renamed Jalan Alfred Russel Wallace in his honour. In 2010, however, it was renamed Jalan Juma Puasa (Friday Fasting), and an alleyway which comes off it was named "Lorong A. Wallace" instead (below).

34. An alley on Ternate island is named "Lorong A. Wallace" in his honor - the image below shows Bill Bailey beneath the sign for it. 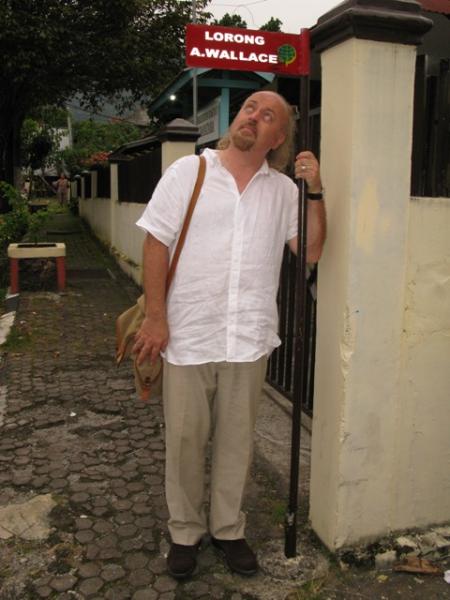 36. Several organisations are named after Wallacea: The Wallacea Institute was set up by Hasanuddin University in Makassar to facilitate the work of Indonesian scientists conducting research focusing on conservation and the sustainable use of natural resources in the Wallacea region; Yayasan Wallacea (The Wallacea Foundation) is a conservation-directed and socially-minded NGO based on Ambon island, Indonesia; Operation Wallacea is an organisation which runs biological and conservation management research programmes that operate in remote locations across the world. These expeditions are designed to educate young people and have with specific wildlife conservation aims in mind - from identifying areas needing protection, through to implementing and assessing conservation management programmes.

37. Operation Wallacea has a resource called the Wallace Resource Library, which is a set of resources for biology, environmental science and geography teachers, specifically designed for 16-18 year old students.

38. Project Wallace was organized in 1985 by the Royal Entomological Society of London and the Indonesian Department of Science to undertake a year-long study of the Dumoga-Bone area of north Sulawesi in Indonesia.

39. The Wallace Correspondence Project arranges a Wallace Lecture on an irregular basis. The first of these was given at London's Natural History Museum by James Moore (Open University, UK) in 2006.

41. Neath in Wales has a Wallace Trail.

44. The Usk Astronomical Society (Usk, Wales), founded in 1974, has a Wallace Observatory which was opened in 2011. Click HERE for more information.

45. Wallace dialect: A dialect of the Indonesian Bajau language is named after Wallace since he was the first person to record a selection of the words of it.

Guillemard, F. H. H. 1886. The Cruise of the Marchesa to Kamschatka & New Guinea, with notices of Formosa, Liukiu, and various islands of the Malay Archipelago. Vol. 2. London: J. Murray.

Hickson, S. J. 1889. A naturalist in north Celebes: a narrative of travels in Minahassa, the Sangir and Talaut Islands, with notices of the fauna, flora and ethnology of the districts visited. London: J. Murray.

Huxley, T. H. 1868. On the classification and distribution of the Alectoromorphae and Heteromorphae. Proceedings of the Zoological Society of London: 294-319.