The theory of evolution by natural selection was first proposed by Charles Darwin and Alfred Russel Wallace in the scientific paper below (the part Wallace authored is known as his 'Ternate Essay'). It is probably the most important scientific paper in the history of biology and it was read at a meeting of the Linnean Society of London on July 1st 1858, before being published on the 20th August of that year in the Journal of the Proceedings of the Linnean Society: Zoology. 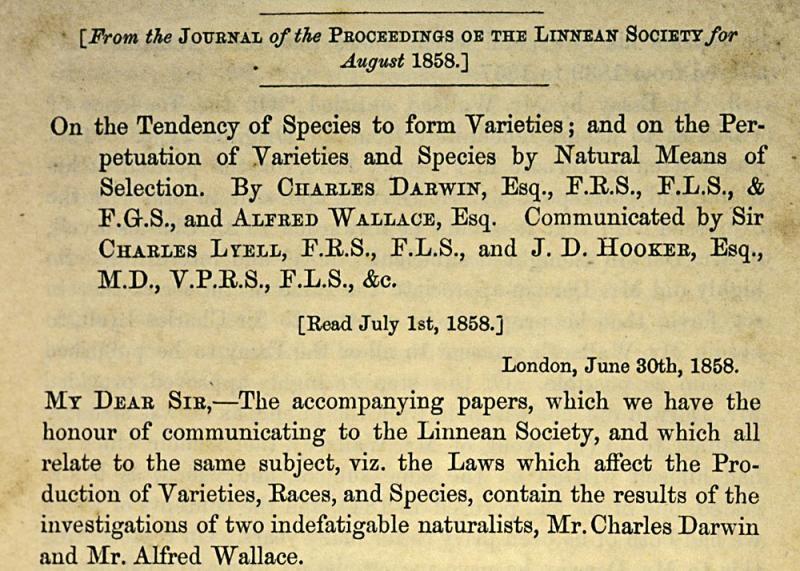 Wallace's Ternate Essay was written in the village of Dodinga on the Indonesian island of Halmahera (known to Wallace as Gilolo) in February 1858 and posted to Darwin together with a covering letter from the neighbouring island of Ternate, probably in March 1858. It's unexpected arrival at Darwin's home in Kent in June 1858 spurred a shocked Darwin to hastily write his famous book On the Origin of Species, which was published fifteen months later in November 1859. For more about the famous Ternate Essay see https://wallaceletters.myspecies.info/content/what-happened-alfred-russel-wallaces-legendary-letter-ternate and for a detailed account of the curious events which led up to its publication see my article Alfred Russel Wallace and natural selection: the real story

Wallace's personal annotated copy of the 1858 paper can be seen HERE This copy was sent to Wallace while he was still in the Malay Archipelago, probably by Darwin. A detailed account of the annotations can be read here: Beccaloni, G. 2008. Chapter 4. Wallace's annotated copy of the Darwin-Wallace paper on natural selection. pp. 91-101. In: Smith, C. H. & Beccaloni, G. [Eds.]. Natural Selection and Beyond: the Intellectual Legacy of Alfred Russel Wallace. Oxford, U.K.: Oxford University Press, xxv + 482 pp.

The way in which Darwin and Wallace's 1858 paper published is somewhat out of the ordinary. The paper is comprised of four parts: an introduction by Lyell and Hooker; two articles by Darwin, each with a separate title, and one article by Wallace, also with a separate title. These were united under one title to form the publication, Darwin, C. R. & Wallace, A. R. 1858. On the tendency of species to form varieties; and on the perpetuation of varieties and species by natural means of selection. Journal of the Proceedings of the Linnean Society of London, Zoology, 3(9): 45-62. [with an introduction by Charles Lyell and Joseph Hooker].  Apart from the introduction, the other sections were each written by a single author; they were not co-authored. So Darwin and Wallace 's contributions were jointly published (it was often referred to by them as their "joint paper"), but they did not co-author the paper. Instead they jointly authored the paper in which the hypothesis of natural selection was published, and are indeed the co-discoverers of this important process. The separate sections they authored can be individually cited in this way:

MY DEAR SIR,-The accompanying papers, which we have the honour of communicating to the Linnean Society, and which all relate to the same subject, viz. the Laws which affect the Production of Varieties, Races, and Species, contain the results of the investigations of two indefatigable naturalists, Mr. Charles Darwin and Mr. Alfred Wallace.
These gentlemen having, independently and unknown to one another, conceived the same very ingenious theory to account for the appearance and perpetuation of varieties and of specific forms on our planet, may both fairly claim the merit of being original thinkers in this important line of inquiry; but neither of them having published his views, though Mr. Darwin has for many years past been repeatedly urged by us to do so, and both authors having now unreservedly placed their papers in our hands, we think it would best promote the interests of science that a selection from them should be laid before the Linnean Society.
Taken in the order of their dates, they consist of:-
1. Extracts from a MS. work on Species*, by Mr. Darwin, which was sketched in 1839, and copied in 1844, when the copy was read by Dr. Hooker, and its contents afterwards communicated to Sir Charles Lyell. The first Part is devoted to "The Variation of Organic Beings under Domestication and in their Natural State;" and the second chapter of that Part, from which we propose to read to the Society the extracts referred to, is headed, "On the Variation of Organic Beings in a state of Nature; on the Natural Means of Selection; on the Comparison of Domestic Races and true Species."
2. An abstract of a private letter addressed to Professor Asa Gray, of Boston, U.S., in October 1857, by Mr. Darwin, in which

* This MS. work was never intended for publication, and therefore was not written with care.—C.D. 1858.

[46] he repeats his views, and which shows that these remained unaltered from 1839 to 1857.
3. An Essay by Mr. Wallace, entitled "On the Tendency of Varieties to depart indefinitely from the Original Type." This was written at Ternate in February 1858, for the perusal of his friend and correspondent Mr. Darwin, and sent to him with the expressed wish that it should be forwarded to Sir Charles Lyell, if Mr. Darwin thought it sufficiently novel and interesting. So highly did Mr. Darwin appreciate the value of the views therein set forth, that he proposed, in a letter to Sir Charles Lyell, to obtain Mr. Wallace’s consent to allow the Essay to be published as soon as possible. Of this step we highly approved, provided Mr. Darwin did not withhold from the public, as he was strongly inclined to do (in favour of Mr. Wallace), the memoir which he had himself written on the same subject, and which, as before stated, one of us had perused in 1844, and the contents of which we had both of us been privy to for many years. On representing this to Mr. Darwin, he gave us permission to make what use we thought proper of his memoir, &c.; and in adopting our present course, of presenting it to the Linnean Society, we have explained to him that we are not solely considering the relative claims to priority of himself and his friend, but the interests of science generally; for we feel it to be desirable that views founded on a wide deduction from facts, and matured by years of reflection, should constitute at once a goal from which others may start, and that, while the scientific world is waiting for the appearance of Mr. Darwin’s complete work, some of the leading results of his labours, as well as those of his able correspondent, should together be laid before the public.
We have the honour to be yours very obediently,
CHARLES LYELL.
Jos. D. HOOKER.

I. Extract from an unpublished Work on Species, by C. DARWIN, Esq., consisting of a portion of a Chapter entitled, "On the Variation of Organic Beings in a state of Nature; on the Natural Means of Selection; on the Comparison of Domestic Races and true Species."

1. It is wonderful what the principle of selection by man, that is the picking out of individuals with any desired quality, and breeding from them, and again picking out, can do. Even breeders have been astounded at their own results. They can act on differences inappreciable to an uneducated eye. Selection has been methodically followed in Europe for only the last half century; but it was occasionally, and even in some degree methodically, followed in the most ancient times. There must have been also a kind of unconscious selection from a remote period, namely in

* I can see no more difficulty in this, than in the planter improving his varieties of the cotton plant.—C. D. 1858.

III. On the Tendency of Varieties to depart indefinitely from the Original Type. By ALFRED RUSSEL WALLACE.