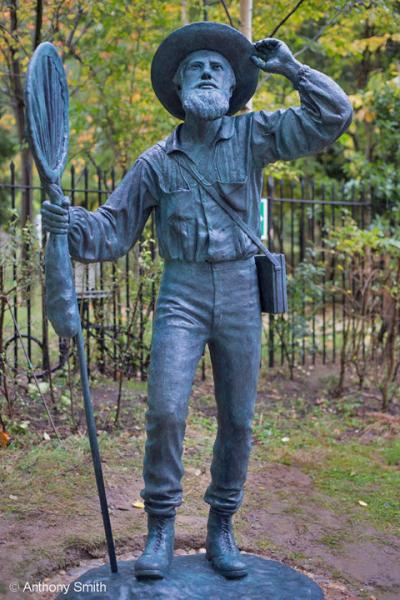 A Bronze Statue of Wallace: A lasting legacy of 2013

On the 15th July 2012 the Wallace Memorial Fund, with the enthusiastic support of our Patron Bill Bailey and our Treasurer, Wallace's grandson Dick, began a campaign to raise £50,000 for a 7 foot tall bronze statue of Wallace to commemorate the 100th anniversary of his death in 2013 - the first three-dimensional likeness of Wallace ever made.

The Fund's campaign closed 7 months later on the 16th February 2013 and exactly £25,000 was raised. Phase 2 of the fundraising campaign began in May and was managed by Entangled Bank Events and the Ancestor's Trail Several exciting fundraising events were organised by these organisations, the last of which took place on November 16th, 2013 (to see details of these click HERE and HERE).

The statue was donated by the Memorial Fund to London's Natural History Museum, where it was unveiled by Sir David Attenborough on the 7th November 2013 - the 100th anniversary of Wallace's death. It was installed outside the Darwin Centre 2 building (which contains many of Wallace's insect specimens) near the wildlife garden, but has since been moved to the second floor above the museum's Hintze Hall. A video of the unveiling can be seen HERE and photographs HERE. BBC Radio 4 'Inside Science' reported on the event and the broadcast can be heard HERE.

What the statue depicts

The sculpture depicts the moment when Wallace sees the magnificent male of the golden birdwing butterfly (Ornithoptera croesus) for the first time in the rainforest of Bacan Island, Indonesia. He is looking upwards and by following his gaze the viewer will see a bronze model of the butterfly some distance away on the glass façade of Darwin Centre Two. This is perhaps the most spectacular of all the hundreds of butterfly species Wallace discovered in the Malay Archipelago and his description of the capture of the first male in 1859 has become legendary. His description of the capture of this stunning insect reads as follows:-

"The beauty and brilliancy of this insect are indescribable, and none but a naturalist can understand the intense excitement I experienced when I at length captured it. On taking it out of my net and opening the glorious wings, my heart began to beat violently, the blood rushed to my head, and I felt much more like fainting than I have done when in apprehension of immediate death. I had a headache the rest of the day, so great was the excitement produced by what will appear to most people a very inadequate cause." (from Wallace's book The Malay Archipelago).

An article about the project to produce the statue can be downloaded HERE.

The statue was sculpted by Anthony Smith who produced a highly acclaimed statue of Charles Darwin as a student for Cambridge University in 2009 plus many other impressive works  (see http://anthonysmithart.co.uk/). Anthony has written a series of blog posts about the making of the statue and you can see them in order here: Number 1, Number 2, Number 3, Number 4, Number 5, Number 6.  The Wallace Fund's Chairman, George Beccaloni, did the research for the statue's clothing and collecting gear and worked closely with Anthony whilst he was sculpting the piece.

How the statue was made

Anthony described the process as follows:

"The first step for creating the statue involved building a strong 'armature' to support the 200 kilogramme sculpture. Onto this skeleton of metal and wood, I built-up the general form of Wallace's body and limbs with wood-wool (an old taxidermists' trick) coated in a thin layer of plaster.

With the aid of a model playing the role of Wallace (and dressed in the appropriate garb), I then began to sculpt the piece, in clay, onto the plaster base.

With the clay sculpture complete, I set about taking a mould; the statue was coated in a layer of silicone rubber and then encased in a plaster 'jacket'. Once everything was set, this gave me a perfect negative impression of the original clay sculpture, right down to the impressions of my fingerprints in the surface of the clay.

At the foundry, this mould was used to create a hollow wax replica of the statue, which was then coated inside and out with plaster, before being placed in an oven to melt out the wax. The result of this process is a fire-proof shell with a small gap (where the wax used to be), into which the molten bronze can be poured. The metal is then left to cool down and solidify before the plaster is broken apart to reveal the hollow bronze sculpture.

Once everything was cleaned-up, the seperately cast parts of the statue were welded together. The final stage was to give the statue its colour. This was achieved by heating up the bronze with blowtorches and applying a cocktail of chemicals which react with the surface of the metal, giving it its beautiful colouring (patination)."

Images showing the entire process of making the statue, from the initial sketches by Anthony, to the completed sculpture, can be seen HERE.

A campaign has begun to raise funds for a copy of the statue for the new Lee Kong Chian Natural History Museum in Singapore. The Sarawak Museum would also like a copy. Ultimately the Wallace Fund would like to see copies of the statue in Indonesia and Brazil as well!

Copyright of the statue

Under UK, law public works of art such as this statue, can be reproduced two-dimensionally (photographed, drawn etc), even be filmed or broadcast/transmitted, without the copyright owner's consent; and such reproductions can also be used commercially without consent. What does need the sculptor's express prior consent is the making of any three-dimensional reproduction (not just a replica) of the sculpture (click HERE for more information). 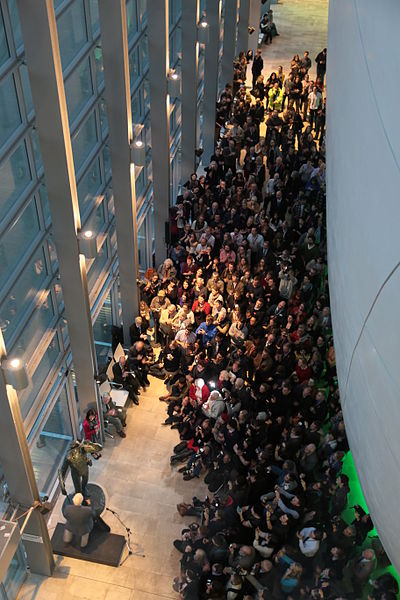 The statue shortly after it was unveiled by Sir David Attenborough. Copyright John Cummings

FOR MORE INFORMATION ABOUT THE DESIGN OF THE STATUE *CLICK HERE*

FOR MORE INFORMATION ABOUT THE DONORS TO THIS CAMPAIGN *CLICK HERE*