On Saturday 20th May 2006 a monument sponsored by the Wallace Fund was unveiled by Wallace's grandson Richard, in Llanbadoc near Usk, Wales, outside the church where Wallace was baptised and close to the cottage where he was born. The monument is made from 350-million-year-old Carboniferous limestone with fossils on its surface, which can be best seen when the rock is wet. There are two black granite plaques on it - which are shown below.

The main plaque on the monument. Copyright Janet Beccaloni 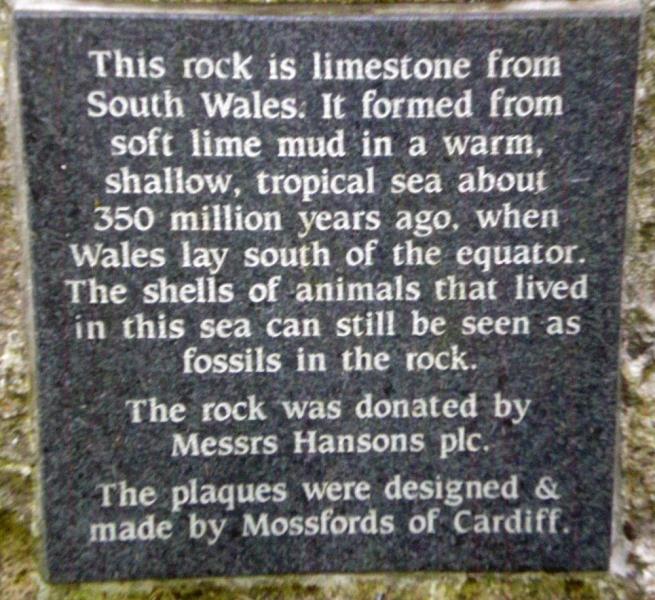 In 1818, Wallace's father's financial situation deteriorated, so he decided to move his family of six children from London to a place where the cost of living was a lot lower. For reasons which are not recorded he chose Usk, which at that time was in Monmouthshire in England... Apparently, the price of food and other goods in Usk was about half that of London - it is not quite that cheap now!

Wallace's father bought Kensington Cottage, situated near the river Usk, about half a mile from Usk town on the road leading to Llanbadoc.

Kensington Cottage. From My Life.

Alfred Russel Wallace was born there on the 8th of January 1823, and eleven days later, according to the family prayerbook, he was 'half-baptised' - a precaution taken just in case he didn't survive for very long! The full baptism took place in Llanbadoc church on the 16th of February - the entry can still be seen in the church's register. Of the three sisters which died in childhood, two passed away at the cottage in Usk and are buried in Llanbadoc churchyard. 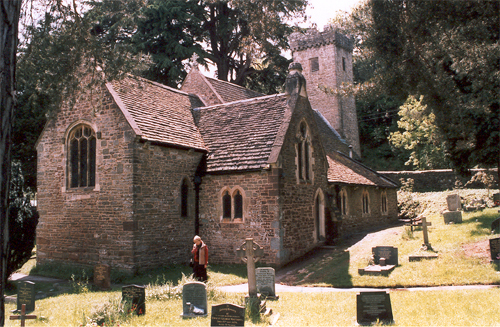 When Wallace was his 80's he could still remember "....the little house and room we chiefly occupied, with a French window opening to the garden, a steep wooded bank on the right, the road, river, and distant low hills to the left."

He continues, "The house itself was built close under this bank, which was quite rocky in places, and a little back yard between the kitchen and a steep bit of rock has always been clearly pictured before me.....In the house, I recollect the arrangement of the rooms, the French window to the garden, and the blue-papered room in which I slept.......so far as I remember, only one servant was kept [the cook], and my father did most of the garden work himself, and provided the family with all the vegetables and most of the fruit which was consumed. Poultry, meat, fish, and all kinds of dairy produce were especially cheap; my father taught the children himself; the country around was picturesque and the situation healthy....."

Wallace writes that the cottage "was less than a quarter of a mile from the old bridge of three arches over the river Usk, by which we reached the town, which was and is entirely confined to the east side of the river, while we lived on the west. The walk there was a very pleasant one, with the clear, swift-flowing river on one side and the narrow sided and wooded steep bank on the other; while from the bridge itself there was a very beautiful view up the river-valley, of the mountains near Abergavenny, ten miles off, the conical sugar-loaf in the centre, the flat-topped mass of the Blorenge on the left, and the rocky ridge of the Skirrid to the right."

On the river, Wallace remembered seeing "....men fishing in coracles, the ancient form of boat made of strong wicker-work, somewhat the shape of the deeper half of a cockle-shell, and covered with bullock's hide. Each coracle held one man, and it could be easily carried to and from the river on the owner's back." He recalls standing on large flat rocks on the riverbank and catching small lampreys in the river. They were scooped up in basins or old saucepans, and eaten by the family for dinner.

Not far from the cottage towards Llanbadoc, there was an active quarry used to obtain stone for building and road mending purposes. Wallace remembers how "....occasionally, the rock was blasted, and sometimes we had the fearful delight of watching the explosion from a safe distance, and seeing a cloud of the smaller stones shoot up into the air." This quarry can still be seen today, although now it is overgrown.

In early childhood Wallace described himself as "exceedingly fair, and my long hair was of a very light flaxen tint, so that I was generally spoken of among the Welsh-speaking country people as the "little Saxon."" His earliest memories were of himself as a little boy in short frocks, with bare arms and legs, playing with his brothers and sisters, or sitting on his mother's lap or on a footstool listening to stories such as "Jack and the beanstalk" or "Little red riding hood".

Another vivid memory of his early childhood was of visits to Usk Castle. In his autobiography he says: "Some friends of our family lived in the house to which the ruins of the castle were attached, and we children were occasionally invited to tea, when a chief part of our entertainment was to ascend the old keep by the spiral stair, and walk round the top, which had a low parapet on the outer side, while on the inner we looked down to the bottom of the tower, which descended below the ground level into an excavation said to be the dungeon...For many years this small fragment of a mediaeval castle served to illustrate for me the stories of knights and giants and prisoners immured in dark and dismal dungeons."

One other early memory was of a recurring nightmare. "I seemed first to hear a distant beating or flapping sound, as of some creature with huge wings; the sound came nearer and nearer, till at last a deep thud was heard and the flapping ceased. I then seemed to feel that the creature was clinging with its wings outspread against the wall of the house just outside my window, and I waited in a kind of fearful expectation that it would come inside...... I think I can trace the origin of this dream. At a very early period..I was shown on the outside of a house, at or near Usk, a hatchment or funeral escutcheon - the coat-of-arms on a black lozenge-shaped ground often put up on the house of a deceased person of rank or of ancient lineage. At that time I only saw an unmeaning jumble of strange dragon-like forms surrounded by black, and I was told that it was there because somebody was dead; and when this curious dream came I at once associated it with the hatchment, and directly I heard the distant flapping of wings, I used to say to myself (in my dream), "The hatchment is coming, I hope it will not get in.""

In 1883 Wallace visited the Usk area for the first time since his childhood. He recounts that "Although the town of Usk had grown considerably on the north side, towards the railway, yet, to my surprise and delight, I found that no change whatever had occurred on our side of the river, where, between the bridge and Llanbadock, not a new house had been built, and our cottage and garden, the path up to the front door, and the steep, woody bank behind it, remained exactly as pictured in my memory. Even the quarry appeared to have been very little enlarged, and the great flat stones were still in the river, exactly as when I stood upon them, with my brother and sisters, sixty years before. The one change I noted here was that the well-remembered stone stile into the village churchyard had been replaced by a wooden one. We also visited the ruined castle, ascended the winding stair, and walked around the top wall, and everything seemed to me exactly as I knew it of old, and neither smaller nor larger than my memory had so long pictured it. The view of the Abergavenny mountains pleased and interested me as in childhood, and the clear-flowing Usk seemed just as broad and as pleasant to the eye as my memory had always pictured it."

Wallace lived in Usk until 1828 when he was five year's old, at which point the Wallace family moved to Hertford, Hertfordshire, England.

Siting of the Llanbadoc monument

Kensington Cottage (now called Kensington house) still survives, although there have been some structural alterations and the houses which used to be on either side of it have been demolished. The bank of the Usk in front of house has been built up to protect against winter floods and on the part of the bank nearest the house is a metal bench with a stainless steel plaque in memory of Wallace. No plaque has been put on the house itself as it is set back too far from the road for a plaque to be seen. For this reason it was decided to site the monument outside the yard of Llanbadoc church, which is a short distance from the house. 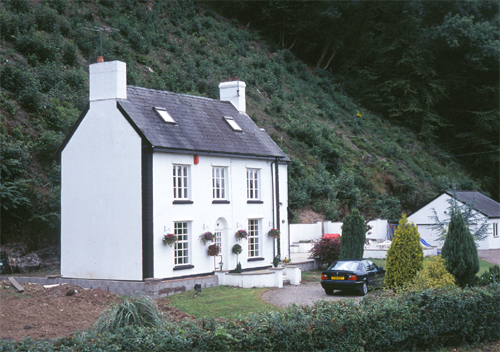 The Wallace Fund would like to thank John Barrow and Anne Cluysenaar very much indeed for the very large amount of hard work they put into the design and erection of this monument, and for organising the lunch and talk (given by myself) at the Three Salmons Hotel in Usk which preceeded the unveiling. We would also like to thank Hanson Aggregates, who generously donated the rock for the monument from one of their quarries near Bridgend. Mossfords, who shaped the monument and made the plaques, were extremely helpful and generous throughout this project, and we would like to thank them and their director Brian Morgan very much indeed.