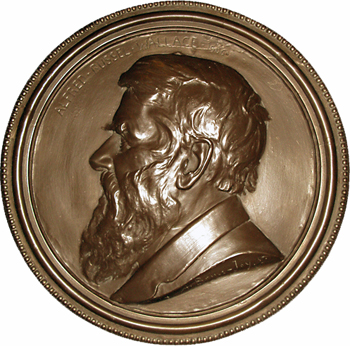 To commemorate the 150th anniversary in 2008 of Wallace's independent discovery of evolution by natural selection whilst on the Indonesian island of Gilolo (Halmahera) [not Ternate!] in February 1858, the Wallace Fund produced 22 replicas of an attractive 55 cm diameter medallion or plaque featuring a side profile of Wallace's head. This is the only sculpture of Wallace known to be made of him whilst he was still alive. The Fund donated examples of these plaques to a wide variety of organisations worldwide which have important connections to Wallace:- ranging from the small museum at his birthplace in Usk, Wales; to the Royal Geographical Society of London (which facilitated his passage out to the Malay Archipelago); to organisations in the countries where Wallace collected natural history specimens (Brazil, Singapore, Malaysia and Indonesia).

The original plaque is owned by The Natural History Museum (London) (see http://piclib.nhm.ac.uk/piclib/www/comp.php?img=49707&frm=med&search=alfred%20wallace) and is made of painted plaster, which was slightly damaged and expertly repaired a long time ago. The replicas were made from Araldite epoxy resin with added bronze powder, cast from a silicone rubber mould of the original which the NHM Library kindly gave the Fund permission to make. Due to the fragile nature of the original plaque it is very unlikely that the NHM will allow another mould to be made in the future.

An inscription on the plaque shows that it was made in 1914 by the well known sculptor Albert Bruce-Joy (1842-1924), who made several different portrait medallions of Wallace in a variety of materials, the earliest known examples of which date from 1906 (see https://wallacefund.myspecies.info/paintings-and-sculptures). The NHM plaque is a copy of the memorial medallion of Wallace in white marble made by Bruce-Joy which is in Westminster Abbey, London (see https://wallacefund.myspecies.info/fixed-monuments), except that it has a different border around it. Bruce-Joy based his portrait of Wallace on photographs and on a live sitting with the great man, possibly in 1897 when Wallace was living in Parkstone, Dorset. Thackery (1995) states that the provenance of the NHM's plaque is unknown, but that it has been in the Museum since at least 1931. Curiously the NHM also has plaster medallions of Charles Darwin and Thomas Henry Huxley which both have the same border design as the Wallace plaque (http://piclib.nhm.ac.uk/piclib/www/image.php?search=darwin200&getprev=49651). The Darwin plaque is exactly the same size as the Wallace one and the Huxley plaque is 4 cm smaller in diameter. Both plaques were made by the sculptor Frank Bowcher (1864-1938) - the Huxley plaque was made in 1902 (presented to the NHM in 1931), and Thackery (1995) says that the Darwin one was made before 1920 and given by Bowcher to B. B. Woodward of the Museum in 1920. Why these plaques were originally produced is currently a mystery.

Funders of the project

The silicone mould of the plaque cost £540 to produce and this was paid for by donations from Prof. Charles Smith (http://people.wku.edu/charles.smith/index.html) and the Bantam Charitable Trust (Trustees Michèle and Chris Kohler). Plaque replicas cost £130 each to make and a generous grant from the Royal Entomological Society (http://www.royensoc.co.uk) paid for seven of them (Wallace was a past President of the RES). The cost of the remaining plaques (minus the cost of having the mould made) was borne by the recipients.

Recipients of the replicas

The Fund presented replica plaques to a number of organisations in the UK which have a strong interest in, or connection to Wallace. In addition the Fund gave replicas to each of the countries where Wallace collected specimens and did fieldwork i.e. Brazil, Singapore, Malaysia and Indonesia. A number of other organisations with an interest in Wallace purchased plaques, as did 6 private individuals.

Thackray, J. C. A. (1995). A catalogue of portraits, paintings and sculpture at the Natural History Museum, London. (Historical Studies in the Life and Earth Sciences No. 3). Mansell, London. 70pp. 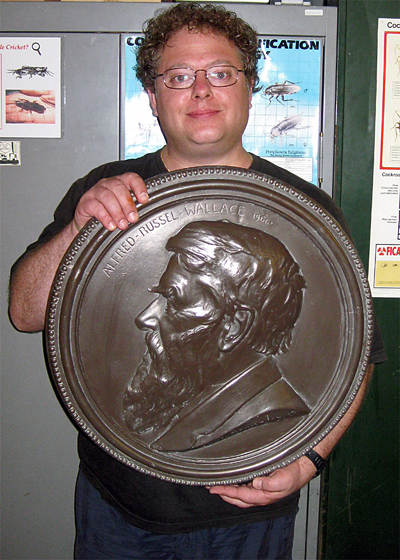 George Beccaloni with one of the replicas