Home » Celebrating the 100th Anniversary of Wallace’s Death - in Ternate

Celebrating the 100th Anniversary of Wallace’s Death - in Ternate

Tony Whitten, Asia-Pacific Regional Director of Fauna & Flora International and leader of the 'In the Wake of Wallace' cruise has sent us an account of the Wallace centenary celebrations in the town from which Wallace sent his world-changing letter to Charles Darwin on the mechanism of evolution:

On the morning of the anniversary, November 7th, the burghers of Ternate woke up to the leader page in their daily newspaper, the 'Malut Pos', being a reminder of Wallace and his legacy. But in the evening, thanks to the generosity of Seatrek Sailing Adventures, government officials, members of the royal family, passengers on the In the Wake of Wallace cruise, and a troupe of dancers and musicians celebrated in style in the old house which some claim was lived in by Wallace during at least part of his time in Ternate.  Dancers accompanied the guests as they arrived after which Mr Ismunandar Syah, a member of the royal family who has lived in the house all his life, welcomed everyone to the celebration. I then offered a few words about Wallace and his legacy, and was followed by Ir Arief Gani, Expert Staff of the Ternate Mayor, representing the Mayor.

The speeches closed with Dr Syaiful Bahri Ruray, the Chairman of the North Moluccas Parliament who for 20 years has been a great Wallace fan and has wanted to get him better known and appreciated. Significantly, he then told us that he expects local budgetary resources to now be available to establish a Wallace centre (library, exhibition) in the house. Now, we all know there will be squabbles as to the validity of the house as a site, but I’m not sure that erecting a new house at one of the sites suspected of being where Wallace’s house stood is any more valid.  Let’s face it, we won’t know for sure about the house unless Wallace tells us through a visitation at a spiritualist séance. While the arguments rage, we lose the opportunity to have a focus for Wallace interest in Ternate.

I presented the major government officials there with copies of Kepulauan Nusantara, the large format Indonesian translation of The Malay Archipelago which includes the Introduction which I penned for the Periplus English edition of the book.  John Priebe, co-owner of Seatrek Bali, presented Mr Ismunandar with a copy of Tim Preston’s beautiful hand-printed book The Letter from Ternate as an early contribution to the house’s collection of Wallace collection of materials. I also presented the representative of the Mayor with a plaque for the house which reads:

"Alfred Russel Wallace (1823-1913) – British traveller, biologist, collector and co-discoverer with Charles Darwin of the Theory of Evolution by Natural Selection – is said to have lived in this house during his stays in Ternate in the 1860s while exploring the islands of eastern Indonesia.  Unveiled on the 100th anniversary of his death – November 7th 2013."

We then enjoyed a wonderful buffet meal of sumptuous local curries, and after a final local dance we all departed, feeling we had witnessed something significant. 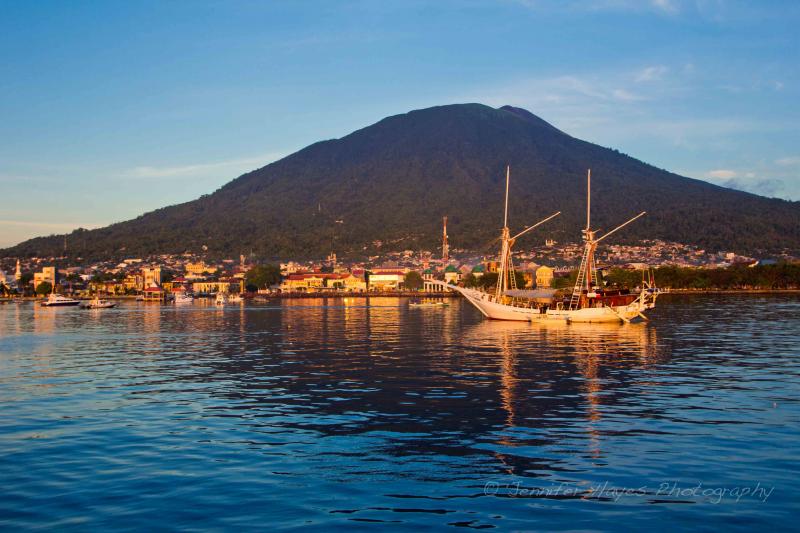 The island of Ternate

The house where Wallace may have stayed during his time in Ternate. The house is located on Jalan Sultan Babulla, close to the Sultan’s Palace in Ternate town.